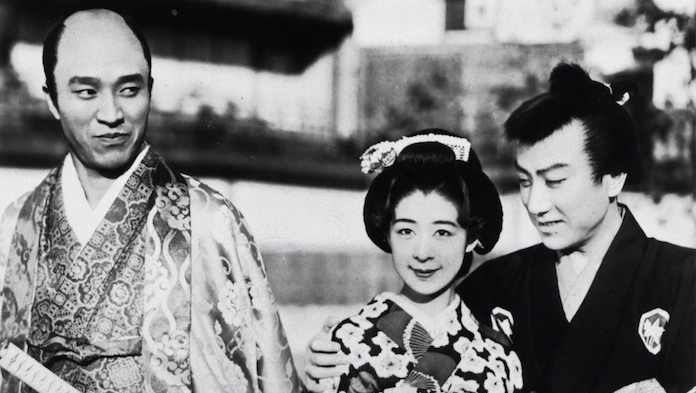 One of the rarest films in our musical programme, the Japanese musical comedy Oshidori utagassen isn’t even available on DVD in the UK – even though, directed by Masahiro Makino, the ‘Busby Berkeley of Japan’, it’s the most frequently revived pre-war musical in Japan and an effortlessly delightful viewing experience.

Daughter of a former ronin (masterless samurai), Oharu is in love with Reisaburo Asai, another ronin who lives next door. But she faces steep romantic competition from two other local admirers – and matters are complicated further when her father, finding himself deeply in debt to the local lord, fears he might have to sell her to pay it off…

Breezy, lighthearted and full of verve, charm and invention, Singing Lovebirds is notable for the way it plays with light and shadow (in both its song lyrics and radiant visuals) and its eclectic jazz score, which pulls in music from native jojuri and naniwabushi to tango and even Cuban-African sounds. The film also features Takashi Shimura, most famous as the lead samurai in Akira Kurosawa’s Seven Samurai, in a singing role. Miraculously shot in only two weeks by Makino and cinematographer Kazuo Miygawa, it’s a joyous, eminently watchable treat.

Organised in partnership with the Japan Foundation, celebrating the Japan-UK Season of Culture 2019-20